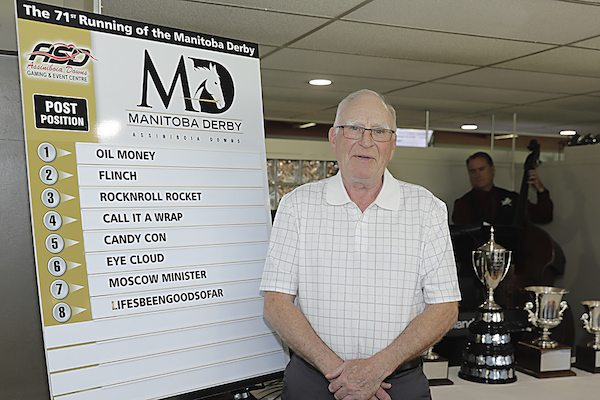 Deep Explorer, trained by Jerry Gourneau and ridden by Chavion Chow, had just come off wins in the Manitoba Mile (July 20) and the R.J. Speers Stakes (June 29), beating Plentiful handily in both races so Saturday’s Overnight was a big win for Duncan, especially after the heartbreak of Manitoba Derby Weekend.

Duncan had two young fillies in the Debutante Stakes on the first night of Derby Weekend, but while That Luvin Feeling ran an impressive second and paid $11.00 to place and $6.90 to show, Be Amazing was a disappointing fifth.

Later that evening, in the Manitoba Oaks, the race to find 2019’s best three-year-old filly at ASD, Duncan’s very nice Storm Stride finished second to the fabulous, undefeated Hidden Grace and paid $7.60 to place and $5.20 to show. It was pretty heartbreaking to go home with two second-place finishes, but on the upside, both were impressive.

Then, in the 72nd Manitoba Derby on Holiday Monday, Duncan’s local favourite, Lifesbeengoodsofar, had a rough ride. Off at 6-1, the Garth Grieder and Violetta Adamczyk-owned Dark Brown gelding, was expected to do well. After all, he had won the Royal Frolic Overnight Stakes and finished second in the Golden Boy Stakes this summer and seemed primed for a big race. However, he had been down with a virus and missed his warm-up race for the Derby and on Derby Day, he just didn’t look right. He never did get on a roll, was never better than fifth and finished a tired seventh.

“Winning the Derby is not easy, that’s for sure,” Duncan said quietly.

Although it was a tough day for the 78-year-old veteran, it wasn’t long before he got his mojo back. After all, for the first time in his career, Duncan is having stress-free fun at the track.

“I started out in this business when I was 20, but I was out of it for about 30 years,” Duncan recalled. “I started in 1960 and was here at the Downs all through the 60s and then I went to the States and stayed there for 10 years. Then I gave up thoroughbred racing for 30 years and came back in 2010.

“I raced in Chicago, in Michigan at Hazel Park and Detroit Race Course, then I moved to New Jersey and raced in Philadelphia and I raced at Monmouth Park for four years.”

However, despite his success in the States, trouble was on the horizon and it arrived in 1979.

“I had a partner who had a massive heart attack and died and that’s when everything seemed to just fall apart,” Duncan said. “So, I decided to come home and watch my kids grow up. I worked in the potato plant for 25 years. I’m glad I did because I got a pension out of that. So, now I don’t have to worry about anything.

“I can live off my pension and because of that, since coming back in 2010, working with horses is fun again. I have 10 horses in my barn and most of them are good horses. I’m having a lot of fun.”

Coming off a Stakes win with Plentiful is certainly fun and on Wednesday night this week, he should have more fun. Duncan has a horse in the sixth race — a $10,000 claimer — named Talkin’ Bull, who is coming off his second career win back on July 24. Ridden by Tyrone Nelson, Talkin’ Bull (3-1) is the No. 2 morning-line favourite behind Mr. Matlock at 9-5.

Duncan also has an entry in the final race of Wednesday night’s card, a $3,500 claimer. The horse is Gotta Curlin at 6-1, ridden once again by Tyrone Nelson.

First post on Wednesday’s live card is at 7:30. The opening post-parade will head out at about 7:15. Murray Duncan will send his first horse out at about 9:55.