Home » News » Round #2: Downtown Pop-Up Toilet Not Finished Its Business

Round #2: Downtown Pop-Up Toilet Not Finished Its Business 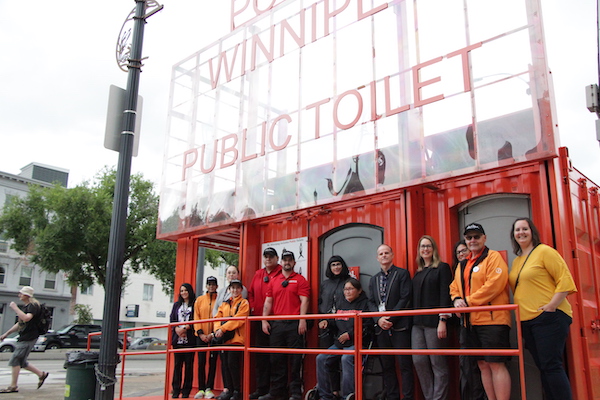 The Downtown Winnipeg BIZ’s pop-up toilet has returned to the city’s downtown for another season. (HANDOUT)

A portable pop-up toilet has returned to downtown Winnipeg for a second season after a warm reception last summer.

Designed by BridgmanCollaborative Architecture, the Downtown Winnipeg BIZ-sponsored toilet is located at the corner of Main Street and Henry Avenue.

It began operating on Monday and is situated adjacent to Thunderbird House and the Salvation Army Booth Centre. The area was chosen because it lacks reliable public washrooms to serve the needs of people living in the city’s core.

“The response to the pop-up toilet last year shows there’s a real need for this service and we’re excited to welcome Main Street Project as a partner in bringing the toilet back downtown for another season,” said Kate Fenske, CEO of the Downtown Winnipeg BIZ.

“One of the key benefits last year was a noticeable increase in cleanliness and a decrease in vandalism in the immediate area where the pop-up toilet was located.”

The pop-up toilet last year was used nearly 2,000 times. While that number is a positive reflection on the need for a permanent washroom in the area, the Downtown BIZ says it will continue to work on long-term strategies for publically accessible washrooms in Winnipeg’s core.