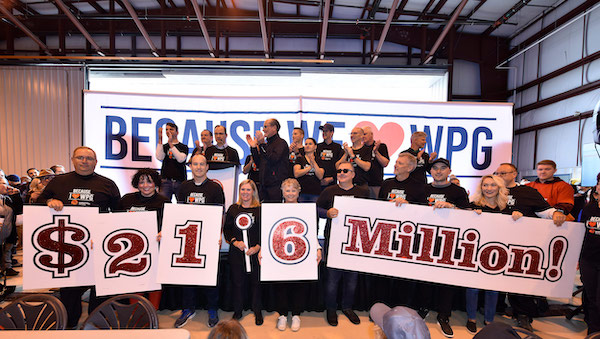 Hundreds of Winnipeggers gathered in an airplane hangar Friday to hear United Way Winnipeg reveal its lofty fundraising goal for their 2019 campaign.

The unprecedented $21.6 million goal officially kicked off the campaign as the community then pulled together for the 16th annual United Way Winnipeg Plane Pull.

“This is our largest goal to date for our community fund, and I am confident that we will achieve it,” said Jeff Goy, president and CEO of Wawanesa Insurance and the volunteer campaign chair for United Way Winnipeg’s 2019 Campaign.

“And that’s because I believe in the immense generosity of Winnipeg and their commitment to community.”

More than 500 Winnipeg workplaces will run campaigns in support of United Way Winnipeg’s campaign this year.

Who has gloves tough enough to pull planes? Facility Sponsor @YWGairport does! Thanks for you help with #PullingForThePeg equipment, YAA! ? pic.twitter.com/M8DVJJS7FI