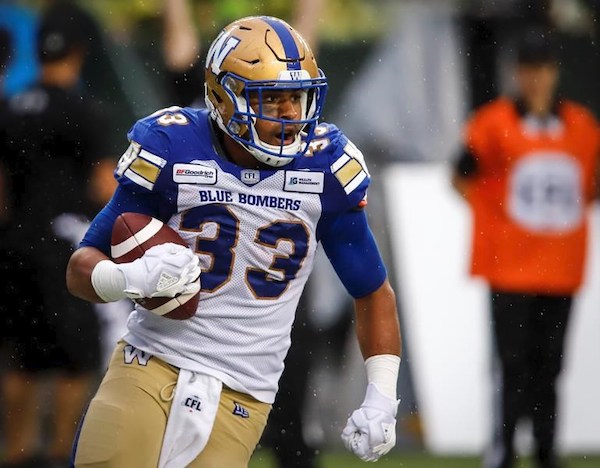 WINNIPEG — Andrew Harris has taken steps to clear his name.

The Winnipeg Blue Bombers star running back was back practising with the team Tuesday after serving a two-game suspension for testing positive for an anabolic steroid called metandienone.

After he was suspended, Harris said the source must have been a contaminated over-the-counter men’s natural energy supplement he took and he planned to send the leftover product away to be tested. He didn’t reveal its name.

“It’s been shipped away and I’m just waiting to hear back,” Harris said after practice. “Again, it’s like a needle in a haystack, but I’m doing everything I can to get some answers.”

The 32-year-old Winnipeg native knows some people won’t believe that he made “an unintentional mistake” but he says he’s gained more insight into product contamination.

“I’m not exactly sure, exactly what it is, but like I said I’m doing my best to get some answers. But for the most part, I’m just trying to get it behind me and move forward.”

Harris told reporters after his suspension that his blood and urine samples were clean when the CFL tested him on March 1 and again on July 2. However, a third test on July 12 revealed positive results on both the A and B urine samples. He said it was small amounts of the banned substance.

“It’s been a tough few months for sure, from both sides of things,” said Harris, who deactivated his social media accounts after his suspension.

“I think I’ve had a lot of positive support, though, from fans, family, people that have been along with me through my journey and a lot of random people that I don’t even know, but overall it’s been extremely tough. But I’m just looking forward to moving forward now and getting back out there with my teammates.”

The Bombers (9-3) went 1-1 during his absence and Harris said he’s “fired up” and feeling fresh.

“He was definitely a little fired up from practice,” said quarterback Chris Streveler, who’ll make his fourth straight start in place of injured Matt Nichols when the Bombers play in Montreal against the Alouettes (6-5) on Saturday.

“He was running around pretty hard and I could tell he was really excited to be back.”

“He’s pissed off,” O’Shea said. “He’s not in any mood to chat and he’s not just gonna exchange pleasantries. He’s angry. I’m sure that will turn into something productive for him.”

Harris still leads the league in rushing with 908 yards on 141 carries through 10 games and is aiming for a third straight rushing title.

He was asked if he thinks his suspension could affect voting for all-stars.

“I’m moving forward and my play will show who the real Andrew is and I’m just going forward that way.”