By Victoria Ahearn, The Canadian Press 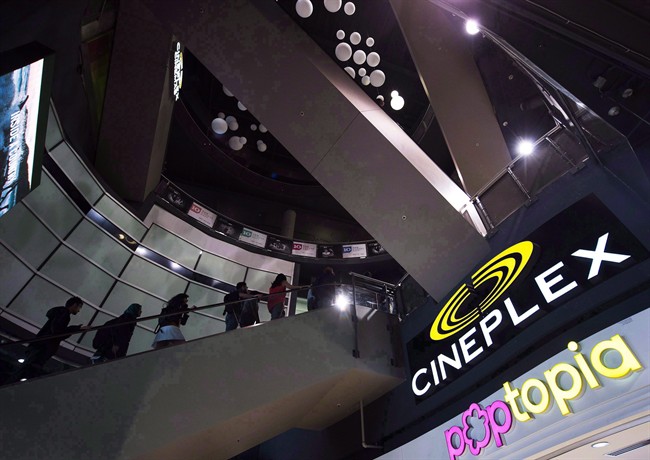 People make their way up an escalator at the Cineplex Entertainment company’s annual general meeting in Toronto on May 17, 2017. (THE CANADIAN PRESS/Nathan Denette)

TORONTO — The president and CEO of Canadian movie theatre giant Cineplex says the company is “extremely frustrated and disappointed” that both Alberta and Manitoba are keeping cinemas closed amid the current COVID-19 protocols.

Ellis Jacob has released two statements on the situation in each province, saying it’s “devastating news” for employees and guests in those regions.

Jacob argues that cinemas are a safer form of gathering than other indoor venues, such as restaurants and big box retailers.

On Monday Alberta Health Minister Tyler Shandro paused the province’s plan to move to the next stage of reopening and lift health restrictions tied to COVID-19, citing rising case numbers.

The move means movie theatres, museums and other entertainment venues will remain closed under Step 2 of the province’s health measures.

But some other businesses, including restaurants, pubs and bars, can open for in-person service, with restrictions.

And on Tuesday, the Manitoba government loosened a few of its COVID-19 restrictions, but after considering reopening theatres, casinos and concert halls, said they must remain closed amid rising case numbers.

“We felt — looking at other jurisdictions, looking at variants of concern — that it just wouldn’t be prudent at this time to go with all of what we proposed,” said chief provincial public health officer Dr. Brent Roussin.

In Ontario, indoor cinemas in the grey and red zones must remain closed, which means theatres are still shuttered in Toronto, Ottawa and Thunder Bay.

Ontario cinemas in the orange, yellow and green zones are able to operate under certain capacity limits. Eastern Ontario is among the regions in the orange zone, while yellow areas include Kingston, Frontenac and Lennox and Addington.

Cineplex does have some theatres open with limited capacity in Saskatchewan, Quebec, Nova Scotia, New Brunswick and on Prince Edward Island.

In both of his statements this week, Jacobs cited a host of health and safety protocols in place at cinemas, including reserved seating with physical distancing and controlled guest counts. Patrons also sit facing forward in a cinema instead of at each other, like they would in a restaurant, and are encouraged to remain silent while wearing masks in large auditoriums with high ceilings.

“Cineplex has a proven track record of operating our theatres safely for our employees and guests, and we, and all Canadians, just want to get back to that,” Jacob said.

Cineplex is among many arts companies across Canada who are upset their venues have to remain closed in various regions while restaurants and other businesses are allowed to operate.

When cinemas in Canada were running during the first and second waves, there were zero reported instances of transmission or outbreaks associated with the screenings, according to the Movie Theatre Association of Canada, which represents the exhibitors behind more than 3,000 movie screens nationwide.

In B.C., movie theatres and live performing arts venues were allowed to start operating under COVID-19 protocols in July but were shut down again in November.

In Vancouver, the Rio Theatre got around the rules by rebranding as a sports bar nearly two months ago, which has allowed the venue to be open with 125 people socially distanced indoors.

British Columbia officials plan to meet this week with arts organizations who feel the restrictions on their sector they feel are unfair, hypocritical and lack scientific evidence.