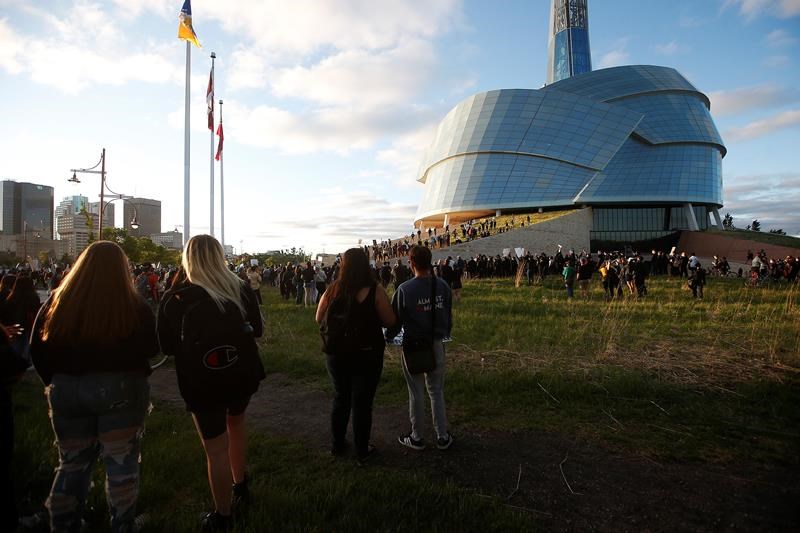 People gather in solidarity with the George Floyd protests across the United States at the Canadian Museum for Human Rights in Winnipeg, Friday, June 5, 2020. (THE CANADIAN PRESS/John Woods)

WINNIPEG — The president of the Canadian Museum for Human rights says a report that found additional sexual harassment complaints and a pattern of racism against Black men is concerning but she’s hopeful change is underway.

“Some of those experiences that are shared in that report, they are deeply disturbing,” Isha Khan, the museum’s president and CEO, said in an interview Monday with The Canadian Press.

“And that’s why we have work to do — and that’s really the work we are doing — to ensure we create an environment where all of our staff feel safe and respected.”

The latest report stemming from an external review says record-keeping of complaints was “decentralized and poor,” and raises concern that appropriate action was never taken.

“There is a pattern of gendered racism being perpetuated against racialized men within the Museum and against Black men in particular, taking the form of sexualizing and fetishizing of certain Black and racialized men and stereotyping Black men as ‘dangerous’ and ‘predatory,'” the report says.

One racialized man included in the report said he would “spend a lot of time and energy protecting myself … I can’t build something sustainable (at work) because all I can do is protect myself.”

The museum was criticized online last year by current and former employees after it posted images of a Justice for Black Lives rally.

The employees said it was hypocritical to bring up the rally when museum staff faced racism at work.

Some also said that LGBTQ content in the museum had been censored at the request of certain school groups.

Khan said staff have received the report and the museum made time for conversations about its finding. In a note to staff, she added that change has already taken place at the museum and work to disrupt oppression continues.

“We all have a responsibility to work together to bring about meaningful change — to be patient at times and to push harder at others,” Khan wrote.

Last August, Khan began a five-year term leading the museum following the allegations that led to the resignation of former CEO John Young. She promised to create an inclusive and respectful work environment.

Winnipeg lawyer Laurelle Harris was brought in to do an external review and her initial report was released last summer. It substantiated claims by current and former employees, and found racism was pervasive and systemic at the museum.

In response, the museum developed a plan Khan said was a “blueprint for change.” There have been more than 4,000 hours of training and a new visitor code of conduct has been developed. There is also a content review of the museums exhibits.

Harris’s second report released publicly Monday includes information from 35 interviews with current employees and has more recommendations, including the development of guidelines for investigating sexual harassment and other forms of discrimination.

It confirms that LGBTQ content was omitted during tours on six occasions in 2017 and one occasion in 2015. Tours also avoided content relating to women’s rights in general and abortion rights in particular during that time, it says.

Museum management did not have sufficient knowledge of foundational concepts about racism, the report says, and there was evidence of differing performance expectations for employees based on race or ethnicity.

The report does recognize significant changes that have already taken place at the museum.

“Racism and oppression cannot be ‘fixed’ in a matter of months,” it says. “Disrupting oppression is an ongoing process. It has a beginning but not an end.”