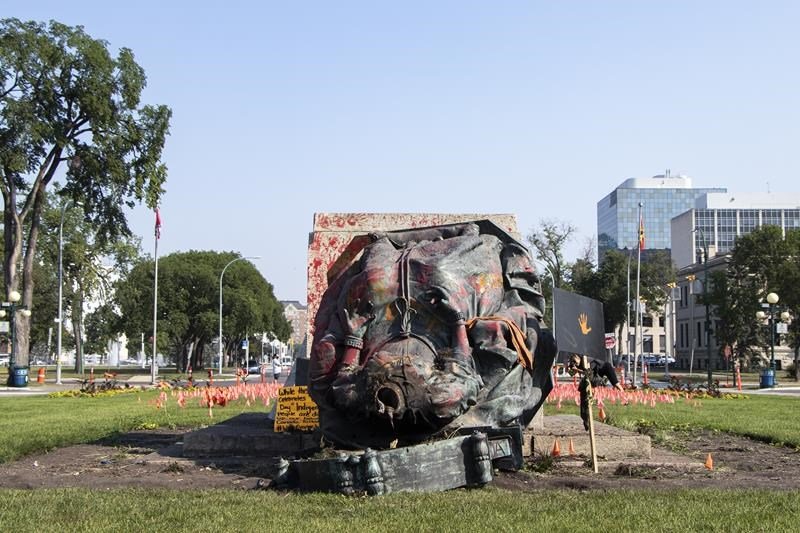 A headless statue of Queen Victoria is seen overturned and vandalized at the provincial legislature in Winnipeg, Friday, July 2, 2021. Her statue and a statue of Queen Elizabeth II were toppled on Canada Day during demonstrations concerning Indigenous children who died at residential schools. (THE CANADIAN PRESS/Kelly Geraldine Malone)

WINNIPEG — Statues of two queens on the grounds of the Manitoba legislature were toppled during a Canada Day rally over the deaths of Indigenous children at residential schools.

The statues of Queen Victoria and Queen Elizabeth were tied with ropes and brought down by a crowd that gathered on Canada Day.

The statue of Queen Victoria, a large structure near the main entrance to the grounds, was covered in red paint and its base had red handprints on it.

The statue’s head was also removed. It was retrieved Friday from the river behind the legislature by a man in a kayak.

On the steps behind the statue were hundreds of tiny shoes, placed there to recognize the children who went to residential schools.

The grand chief of the Assembly of Manitoba Chiefs, Arlen Dumas, was at a separate event at the time. He said he was shocked at what happened.

“I personally wouldn’t have participated in that … mind you, it has been a very triggering time over the past few weeks,” Dumas said Friday.

“It’s unfortunate that they chose to express themselves the way that they did. But it’s actually a symbol of the fact that there is a lot of hurt and that there’s a lot of frustration and anger with just how things have happened.”

“They are a major setback for those who are working toward real reconciliation and do nothing to advance this important goal,” Pallister said in a prepared statement.

“Those who commit acts of violence will be pursued actively in the courts. All leaders in Manitoba must strongly condemn acts of violence and vandalism, and at the same time, we must come together to meaningfully advance reconciliation.”

The Winnipeg Police Service said some of its members were assaulted and spit on, and had their vehicles struck with rocks and paint.

Police Chief Danny Smyth said officers did not try to stop the damage to the statues, which he said was done by a small number of the 1,000 or more people in the crowd.

“We did not want to further incite the crowd that had gathered,” Smyth said Friday.

One man was arrested and faces a charge of damaging a private vehicle after the event, Smyth said, and more charges may come as the investigation, aided by many security cameras on the legislature grounds, gets underway.

Many events normally associated with Canada Day were either cancelled or scaled back this year, after hundreds of unmarked graves were found at residential school sites in British Columbia and Saskatchewan.

There were also other acts of vandalism.

A statue of Queen Victoria in Kitchener, Ont., was doused in red paint.

In Victoria, B.C., a statue of Captain James Cook was dismantled and thrown into the harbour. The statue was replaced with a wooden cut out of a red dress — a symbol representing murdered and missing Indigenous women — and its base was smeared with red handprints.

In St. John’s, N.L., two prominent buildings and a statue dedicated to the local police force were vandalized with bright red paint.

Back in Winnipeg, Dumas said he would be willing to help replace the statues at the legislature.

“I’d be willing to help facilitate … creating perhaps a replacement monument that’s more reflective of all of us,” he said. “Statues can be replaced but the children we’ve lost will never return.”

The Manitoba government was planning to erect a statue of Chief Peguis on the legislature grounds. The move, announced last October, is aimed at commemorating the signing of the first treaty in Western Canada in 1817.