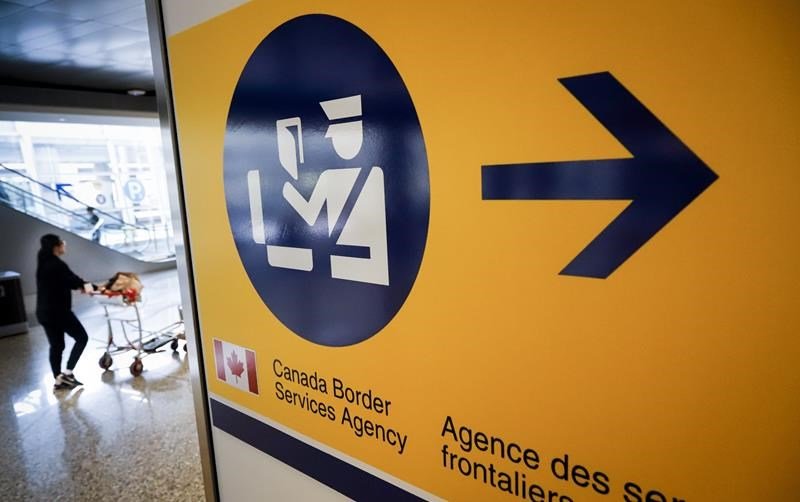 A Canada Border Services Agency (CBSA) sign is seen in Calgary, Alta., Thursday, Aug. 1, 2019. The agency that guards Canada’s borders is putting would-be travellers on notice: if you’re not eligible to enter the country now, you won’t be on Monday. (THE CANADIAN PRESS/Jeff McIntosh)

WASHINGTON — The agency that guards Canada’s borders is putting would-be travellers on notice: if you’re not eligible to enter the country now, you won’t be on Monday.

That’s the clear message from the Canada Border Services Agency as it prepares to deal with an influx of visitors next week once the federal government begins its preliminary easing of COVID-19 travel restrictions.

As of midnight Sunday night, fully vaccinated Canadian citizens and permanent residents will be exempt from quarantine requirements when they enter the country.

However, the exemption only applies to those eligible travellers who have gone 14 days since receiving a full course of one of the four vaccines approved for use in Canada.

It also requires travellers to use the ArriveCAN app or online service prior to departure to log their vaccination details, as well as the results of a negative COVID-19 test conducted no more than three days before their arrival.

“If you were unable to come to Canada on July 4 of this year, you can’t come in on July 5 — there’s been no change to all of the restrictions and the provisions that have been issued on that front,” said Denis Vinette, CBSA vice-president, travellers branch.

“However, for those that can come to Canada, it’s a very cautious, early first step in starting to delayer or remove some requirements at the border.”

Travellers who arrive in Canada prior to Monday will still be required to spend 14 days in quarantine upon arrival, as well as three days in a government-approved hotel for those arriving by air.

Vinette said the agency is anxious to ensure people understand what is changing and what is not in order to prevent excessive delays or tie-ups at border control points.

“I think we can expect, certainly in the early days, individuals believing that, you know, July 5 is here, Canada is now open for tourism, recreation and things of that nature. That is not the case,” he said.

“We’ve prepared our front-line staff, who’ve been having to deal with this since the onset, for those types of scenarios.”

The ArriveCAN portal can be accessed either via the Apple or Android app or online via the federal government’s website at canada.ca. Travellers are required to use the latest version of the app, which will be updated when the regulations change.

Prime Minister Justin Trudeau said he’s confident the border agency has the tools and the personnel required to deal with the changes Monday, adding that the government’s priority will always be the safety of its citizens.

“I think it’s really important that we are moving forward on allowing people who are currently allowed to come into Canada … to be able to do so and not have to quarantine anymore, because they’re double-vaccinated,” he said.

“For others, we will be looking at how this works before we open up to next steps, but we will continue to put first and foremost the safety and security of Canadians at the top of everything we do.”

The mutual travel restrictions between Canada and the United States — which prohibit all discretionary travel between the two countries while continuing to allow the movement of trade, essential workers and international students — are due to expire July 21.

It’s too soon to say how the rules might evolve by then, Trudeau said.

“When we start reopening so Americans and others who are fully vaccinated can come into Canada will depend on how this goes — on the data we collect, on how we’re able to keep Canadians safe even as we make adjustments to the rules.”

Now is not the time to be cavalier, he added: Yukon is dealing with its largest spike of cases since the pandemic began, despite having more than 70 per cent of its population fully vaccinated.

“Every step of the way, we’re going to make sure we keep Canadians safe.”

Vinette, who has been with CBSA for 29 years, said the extensive nature and duration of the restrictions have made it one of the most challenging periods for the agency in modern history — even more so than 9/11.

“I’ve never seen the border shut down as tight as it’s been, where you essentially have … less than 10 per cent of historical travel volumes,” he said.