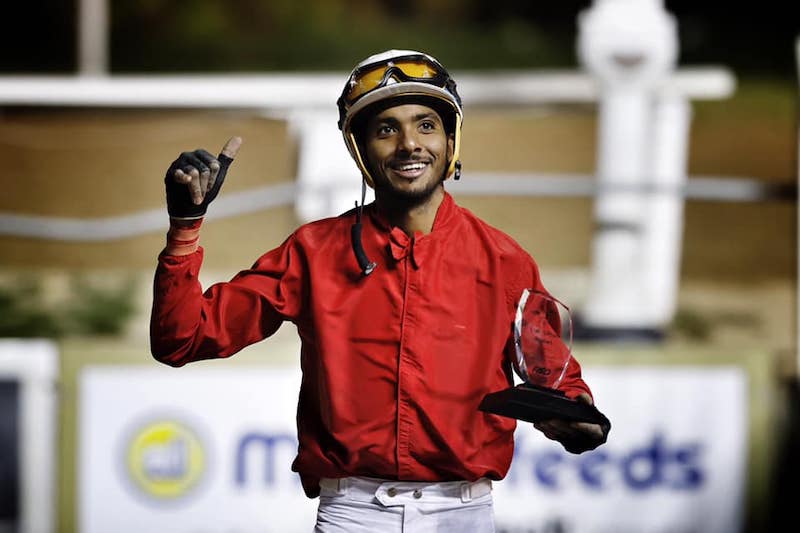 However, there is one category in which Chadee Jr. dominates all other jockeys at the local track and it is reflected in the amount of money he has won for his owners.

When it comes to winning stakes races, Chadee Jr. is the expert. Last year, he won more than a dozen. This year, he’s already won seven stakes – three aboard Miss Imperial, two on Melisandre and one each on Impressive Sense and Flash of Glory. He’s also won three of the last four stakes races at the Downs.

Last week, he was on the vaunted Miss Imperial, who won her third Stakes race of the year, beating a very game Cypress Point to the wire by a length and a quarter to take the $35,000 Escape Clause Stakes for older mares.

Between Melisandre’s undefeated two-year career and Miss Imperial’s seven stakes victories since arriving at Assiniboia Downs from Oaklawn Park last May, it’s been one constant ride to the winner’s circle for the 31-year-old jockey from Trinidad.

“It was the same way last year with most of the stakes,” said Chadee Jr. “I get to ride so many good horses, Miss Imperial, Melisandre, Impressive Sense and I was on Flash of Glory in the Derby Trial. And, really, those two mares (the three-year-old filly Melisandre and the five-year-old mare Miss Imperial) are very, very good horses.”

Chadee Jr. has been a professional jock since he was 16-years-old. Of course, he’ll easily admit that thoroughbred racing is in his blood.

“I’m from Trinidad and racing was the family trade,” he explained. “My dad used to train horses and my uncle, too. My uncle still trains horses.

“When I was small, my cousin was starting to ride and he asked me to start with him, but at that time, my dad had left the track and didn’t go back to for five years. But being around my cousin, everything was horse, horse, horse. So, then I kind of started to wonder if I could ride. I’d been to the track a couple of times when my dad would take me, so I told my dad, ‘I want to ride a horse,’ and he said, ‘No, I don’t want you riding horses, you have to finish school.’ Then my mom says to my dad, ‘It’s in his blood, let him do it. Take him to the track.’ So, my dad finally said, ‘OK, you want to go there? The only way you’ll go there is if I go with you.’ So, after five years, he went back to the track and he ended up buying a horse and that’s how I started.

Chadee Jr. will admit that it’s always been a goal of his to ride at the big tracks in the United States. But he’ll also concede that he might not be quite ready for the jump.

“I had a really rough start,” he said. “Back home in Trinidad, you would get a horse and ride a winner and the next time, you wouldn’t even get to ride him. There were more lows than highs. It was always up and down. It took a while to get people to believe in me and then people would say, ‘Oh, you’re too tall to be a jockey.’

“The first time I came to Canada was 2009. I was 19. I went to Marquis Downs (Saskatoon) and did pretty good. I rode the next two years, but I came late and was still undecided. Then a guy who owned a horse in a stakes race said to me, ‘You can ride. You should come to Edmonton.’ That’s why I moved to Edmonton. In Edmonton, I was kind of unlucky because I broke my collarbone that same year and the next year, I fell again and then I missed one full year. In 2014, I didn’t ride at all but, in 2015, I thought I’d give it one more shot and I’ll go back to Marquis Downs. That year I won the championship and then I decided to come to Winnipeg It was 2016 and it was rough at the start, but it’s paying off now.”

He’ll likely ride Flash of Glory in the Derby because he doubts the super-filly Melisandre will race against the boys on Monday, Aug. 2.

“I don’t know if anything spectacular might be shipping in, but right now I’m on Flash of Glory,” he said. “The Derby only comes once a year and it’s a $100,000 race and obviously, you want to ride the best horse you can in that race. I’m excited about it because I’ve never won a Manitoba Derby.

“I don’t think Melisandre will race in the Derby and I don’t think she’s going to race in the Manitoba Oaks next week, either. From what I know, they are preparing her for the Manitoba-bred fillies’ race, the R.C. Anderson Stakes ($35,000) on Aug. 4. I don’t know if she’d run in the Oaks (July 26), too. They’re only nine days apart.”

When you ride the calibre of horses that Chadee Jr. has been on the last couple of years, you have to ask which one is his favourite? Truth is, he can’t really choose between Miss Imperial and Melisandre.

“It’s tough to say between those two mares,” he said. “They’re both intelligent horses. I guess I’ll say Melisandre because she’s undefeated. She’s kind of a versatile, special horse. I don’t have to use the whip much with her. But Miss Imperial won a big race last week. She was gutsy. I gallop both of those horses every day so they’ve become like my own. It’s nice when you can ride horses of that calibre.”