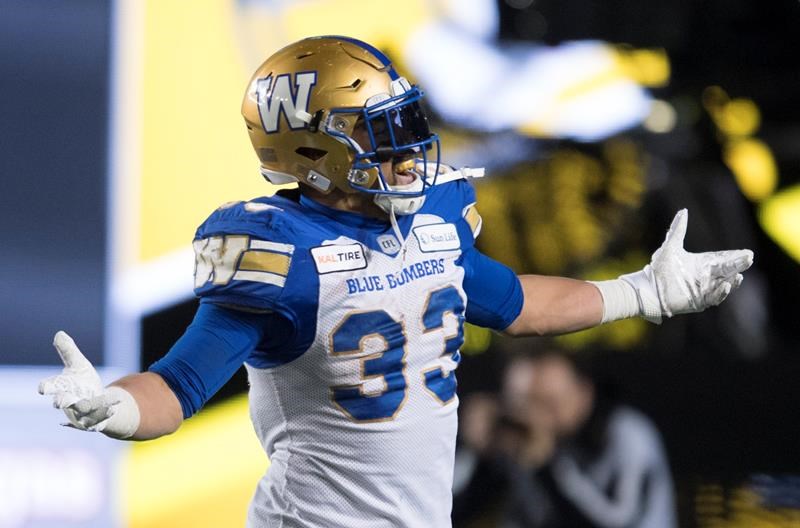 Winnipeg Blue Bombers’ Andrew Harris celebrates his touchdown against the Hamilton Tiger-Cats during the first half of the 107th Grey Cup in Calgary, Alta., Sunday, Nov. 24, 2019. (THE CANADIAN PRESS/Nathan Denette)

The star running back for the Winnipeg Blue Bombers (2-1) will make his season debut Sunday at home against the Calgary Stampeders (1-2) after missing the first three games of the year with a calf injury.

Harris was hurt early in training camp and said the wait was “agonizing,” especially since last season was cancelled because of the COVID-19 pandemic.

“When COVID comes and you have a slow start to camp and you miss some games, time just ticks on very slowly,” Harris, 34, said Saturday after the Bombers wrapped up their preparations.

He doesn’t think it’ll take him long to get into a groove.

“The biggest thing now is just my eyes, my vision,” Harris said. “You know it’s going to be a whole different speed come (Sunday), so it’s going to take maybe a couple series, honestly, to kind of get in the swing of things.

“But I’m definitely ready for that and expecting that and I’m sure I’ll be hitting full stride fairly shortly after we get rolling.”

Getting back the CFL’s rushing leader for the past three seasons — and the most valuable player in the 2019 Grey Cup — was welcome news for Harris’s teammates, especially quarterback Zach Collaros.

“Everybody knows and loves Andrew and what he can bring to the table, and just his understanding of what we do offensively definitely helps.”

Winnipeg’s run game has stalled lately. Fellow Winnipegger Brady Oliviera rushed for 126 yards in his first start at tailback in the season opener, but he was held to a combined 57 yards in the past two games against Toronto, including last week’s 30-23 loss to the Argonauts.

Crapigna was 3-of-5 in field-goal attempts — the longest he made was 22 yards — but he wasn’t sent out to try many long kicks.

O’Shea said Liegghio had success with Western University and he has “full confidence” in the fifth-round CFL draft pick.

Maier shook off two early interceptions last week and guided the Stampeders out of an 11-point deficit to a 28-22 win over Montreal. He was 16-of-29 passing for 304 yards with the two picks and one touchdown.

“You have to be able to analyze why certain things didn’t go your way, why certain plays didn’t work, why you failed in certain areas and grow from that,” the 24-year-old California native said.

Calgary head coach Dave Dickenson said quarterbacks have to be free to make some plays, but he’d like the offence to improve in one particular area.

“Ball security, 100 per cent,” he said. “We also snapped one on the wrong count and we just can’t do that against Winnipeg, we won’t win the game.”

Maier is well aware that Winnipeg’s dominant defence will try to throw him off the game plan.

“They have the true identity of rushing the passer and they believe in what they’re doing,” he said. “You can see that just with the body language and the swagger that they all have.

“There’s things that we can do to help slow that down a little bit. We’re going to need to. We’ve got to be able to at least limit what their greatest strength is.”

The Bombers lead the league in fewest points allowed this season at 14.3.

CLUTCH KICKER: Stamps placekicker Rene Paredes is 9-for-9 in field goals this season and has a streak of 13 good FGs in a row.

BE LIKE BO: The last Calgary quarterback to lead the Stamps to a victory over Winnipeg who wasn’t named Bo Levi Mitchell was Kevin Glenn in 2013.