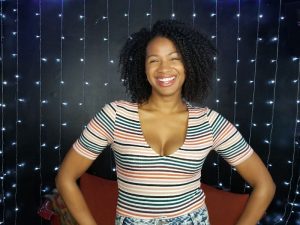 Comedian Aisha Brown will host the “Truth to Power” gala as part of this year’s Winnipeg Comedy Festival. (HANDOUT)

The Burton Cummings Theatre will play host to the hilarity of performers from October 5-10 in front of live audiences.

“We were unable to hold our regular spring festival this year,” says executive director Nick Kowalchuk. “The thought of a 20th year without a festival was something we didn’t want to contemplate. We’re thrilled the fall presents an opportunity for us to welcome audiences back into our venues, and we’re set to celebrate with a really stellar lineup of performers.”

Thirty of Canada’s hottest stand-up comedians will perform over the span of three days (October 7-9) for five gala shows being taped for CBC.

Gala tickets normally cost $35, but are being sold at a special anniversary price of $20.

“Winnipeg comedy fans are the best comedy fans in the country,” says artistic director Dean Jenkinson. “We wouldn’t be here without them, and this is a small way to give them a huge thank you for two decades of support.”

Comedy fans will also be treated to shows at the Gas Station Arts Centre:

Patrons will be asked to show proof of double vaccination and seating will be limited to 50% capacity.

Tickets for performances at the Gas Station Arts Centre are $15 with in-person and online ticket options available.