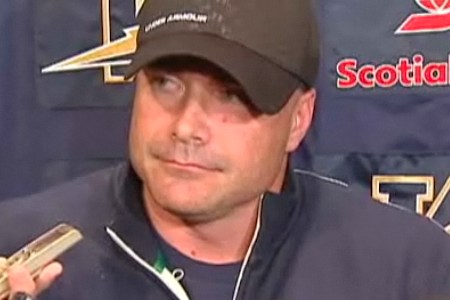 Troy Westwood is back on the practice roster for the Winnipeg Blue Bombers, but don’t count him out as giving up his radio gig just yet.

During Monday’s press conference, Westwood said he enjoys being on the air at QX104 FM as morning co-host and will manage both jobs. Besides kicking and being on the country dial, Westwood works with underprivileged children as well. Good guy. Just 83 more jobs and he’d be in line with Ryan Seacrest.

The possibility of a return came in the form of a text message from head coach Mike Kelly on Sunday. The veteran punter happened to be in a movie at the time and was ecstatic to hear the news. If any of you are movie buffs, he went to see “Couples Retreat” and rated it 4 out of 10.

Westwood won’t be wearing #7 again, but says it doesn’t bother him — he’s just happy to play.