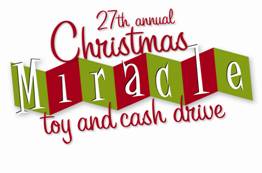 If Christmas shopping is on your list of things to do this week, it wouldn’t hurt to pick up a toy to donate at the 27th annual Christmas Miracle. The toy and cash drive kicks off today at St. Vital Centre.

Over the three day broadcast, CHUM Radio will reach out to Winnipeggers and encourage them to stop by the event with a gift of a new unwrapped toy or cash donation.

“Manitoba is blessed. We won’t feel the impact of the economy as much as other parts of Canada. Still, we anticipate there will be an increase this year, but aren’t certain just what size that increase will be,” said Kai Madsen, Executive Director of the Christmas Cheer Board.

Toy and cash donations are also being accepted at all TD Canada Trust branches and RONA locations in the city. Last year, over 5,000 toys and $50,000 was raised during Christmas Miracle.

Listen to a special message from Kai Madsen:

Thanks to CHUM Radio for sending over the guest list.