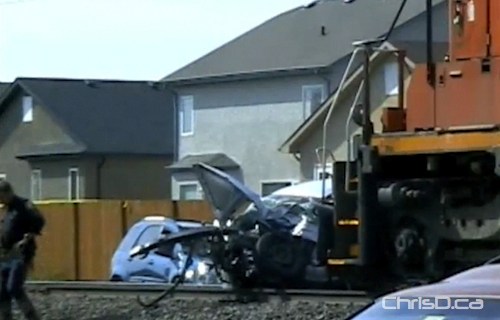 Today is the start to Rail Safety Week, and the CN Police will be on a safety blitz to educate the public on the dangers of railway crossings.

The idea is to eliminate situations like the accident shown above, where a vehicle attempted to beat the train at a crossing at Pembina Highway and Bison Drive on September 9, 2008. Miraculously, no one was seriously hurt, and all three passengers in the vehicle recovered.

CN Police will be out at approximately 150 locations throughout Canada and the U.S. until Sunday, including at commuter stations. They will send clear messages to motorists and commuters about the importance of safety at crossings and the deadly risks of trespassing on railway tracks and property. They will also be on the lookout for proper seatbelt use.

← Previous: Graduating Students Get Their Pick of Gowns Next: Dominoes Fall into Place in New U of M Redevelopment →
Tags: CN Rail | Train