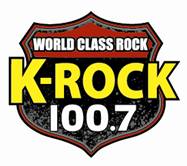 A new Winnipeg radio station was launched Tuesday morning on the same frequency as the former Hank FM.

K-ROCK 100.7 began at 6 a.m. with the “Bob & Tom Show” — a syndicated program out of the U.S. featuring news, sports, lifestyle content, and celebrity interviews.

The station is promising to provide listeners with world class rock, such as Led Zeppelin, Aerosmith, AC/DC, Neil Young, and Van Halen.

“We are very proud to be Winnipeg’s newest home of the best rock that has ever been recorded,” said general manager Randy Skulsky. “It’s an eclectic mix that has never been heard in our great city before.”

Skulsky was also the general manager of 100.7 Hank FM, which failed miserably as a station in almost every ratings book in recently memory.