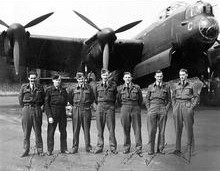 A piece of aviation history will be on display this weekend at the Western Canada Aviation Museum.

The WW II Lancaster Bomber will visit the Museum Friday through Monday.

Visitors to the “Mynarski Memorial Lancaster” can climb into the pilot’s seat, walk through the aircraft, see the mid-upper-gunner’s turret, the bomb bay and the tail-gunner’s turret and chat with the crew. The public will see what it was like for the crew of 7 (pilot, flight engineer, navigator, wireless operator, bomb aimer, mid upper gunner and rear gunner) to live in these cramped quarters for a flight that might have lasted over 12 hours in combat.

The Bomber will be on display during the following times only:

Visitors wanting to jump the line and pre-pay for their museum admission on Lancaster weekend can call 786-5503 or e-mail [email protected].