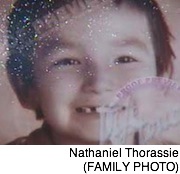 After the Winnipeg police called off their underwater search for a six-year-old boy who fell into the Red River last Saturday, another organization is stepping up to continue recovery efforts.

Manitoba Search and Rescue plans to conduct their own search in the Red River near Rover Avenue today. Eight divers will be going in the water underneath the Disraeli Bridge at 8 a.m. to start a two-day search.

In a release, MSAR said an ice assessment on Thursday was cause for concern due to rising water levels. Another assessment will be conducted this morning prior to diving. If water and ice conditions change, making it unsafe for drivers, a search will then take place when the river is completely frozen in late December or early January.

“I am overwhelmed by the tremendous of support from the citizens of Winnipeg and these organizations that are willing to place themselves at risk to assist in the recovery of one of our children,” MKO Grand Chief David Harper said in a statement.

Six-year-old Nathaniel Thorassie was playing on the river December 4 with his 10-year-old brother, when both boys fell in. A passerby was able to rescue the 10-year-old with a tow rope, but Nathaniel went under and could not be located.

Police searched the river for three consecutive days before concluding their efforts.

If the boy’s body is recovered, the family will return it to Split Lake for burial.