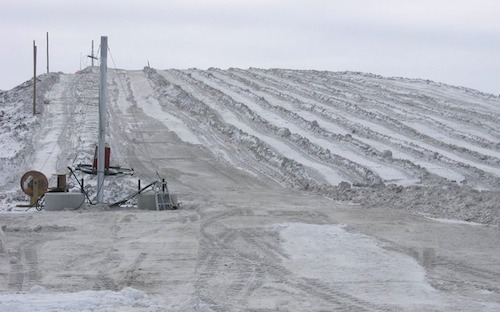 The groomed snow tubing hills at Adrenaline Adventures are ready for riders. An official grand opening will take place December 26 at 10 a.m. (FACEBOOK)

Phase one of the multi-million dollar snow tubing hill just west of the Perimeter Highway will open on December 26 at 10 a.m.

Adrenaline Adventures announced a $5 million plan in late November to build a wakeboarding park and winter recreation area in Headingley.

The 40-metre snow tubing berm is ready to go, according to the owner.

“We were able to set-up and groom eight tubing lanes and the ride down is phenomenal,” said Jason Rohs.

Each lane is groomed and will take a rider down a 120-metre speed adventure. A fully functional tow rope is active to take the rider back up the hill in a very short period of time.

The hill also includes a 1,600-square-foot clubhouse for riders and spectators to keep warm, and will serve hot food and beverages.

Although the hill won’t officially open until Boxing Day, a special open house will be held for the public tonight from 6:30 p.m. to 8:30 p.m.