Home » Entertainment » Puppeteers Hamming it Up at ‘Puppet Slam’ January 31

Puppeteers Hamming it Up at ‘Puppet Slam’ January 31 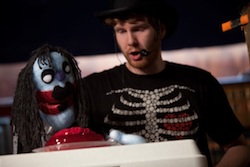 Winnipeg puppeteers are uniting to put on the city’s third and biggest puppet slam event at the Gas Station Theatre on January 31.

Heather Henson, puppeteer and daughter of the legendary Jim Henson, visited Winnipeg last year and encouraged local performers to put on a puppet slam — a show for adults where various artists do short performances using puppetry.

This month’s event will feature live music by the Secondhandpants and brand new works of puppetry by 6, Adhere and Deny, Jazz on a String, The Wishweweres, Prominent Chin, X, Jeannine DesRoches, and a few surprise guests.

Tickets to Frozen Strings Puppet Slam are $10 and can be purchased at WinnipegPuppetSlam.com, or at the door. Doors open at 7 p.m. The show starts at 8 p.m.