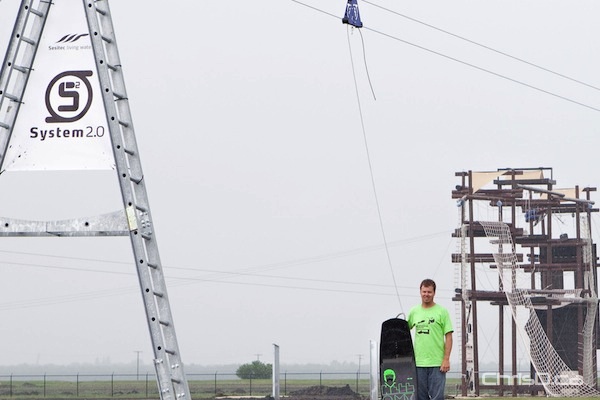 Owner Jason Rohs stands next to a cable wakeboarding tower with the high-ropes course in the background. (CNW GROUP / ADRENALINE ADVENTURES)

A wakeboarding facility that’s been in the works since last year will finally open in time for Canada Day.

Adrenaline Adventures just outside the Perimeter will include a five-storey tall ropes course with ziplines, a beach with volleyball courts, and a licensed clubhouse with waterside restaurant.

During the winter months, the park has been used as a snow tubing hill, pulling riders up the slippery slope after completing their run down the groomed lanes.

Owner Jason Rohs privately funded the $5 million facility on his own.

Cable wakeboarding facilities will be open to the public beginning on July 1, and the high-ropes course beginning June 25.

The public will have access to two wakeboard lakes, which includes a smaller lake for beginners, and a 10-acre lake with the largest cable system in Canada. Up to nine wakeboarders can ride the systems simultaneously. The site has been designated as Canada’s official training facility.

Adrenaline Adventures will also host their first major event just days after opening. From July 8-10, the Monster Energy Triple Crown and the WWA Wake Park World Series will be held at the park, as well as the first ever Canadian Wake Park Nationals, attracting 50 of the world’s top wakeboarders.

The weekend will include the band Swollen Members and be televised on CBS Sports.