One Dead in Pukatawagan Plane Crash 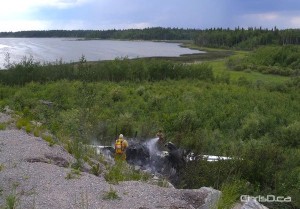 One person was killed when a plane went off the runway in Pukatawagan. (RCMP HANDOUT)

One person was killed after a plane crash in Pukatawagan, Manitoba Monday.

RCMP say at about 4 p.m. a commercial aircraft went off the end of the runway during takeoff, which caused an ensuring fire.

Eight passengers and a pilot were on board at the time.

There are no reports of any other injuries.

Police and the Transportation Safety Board are investigating.

UPDATE: July 5, 2011 — The deceased passenger has been identified as a 56-year-old man from Opaskwayak Cree Nation. His name will not be released. The remaining passengers are being treated for non-life threatening injuries in Winnipeg.