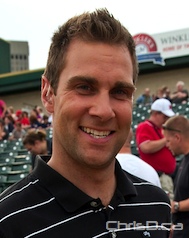 Witzel broke the news on Twitter Thursday afternoon by saying, “I will be moving on to a new media job as a meteorologist in August but will never forget my time here in Manitoba.”

A source tells ChrisD.ca Witzel will assume a similar role as a weather anchor on Global Calgary’s morning show.

Witzel’s last day on-air will be next week. A replacement is already being sought.

Fellow CTV weather specialist Sylvia Kuzyk is also on her way out. As announced in June, Sylvia will retire in the fall.

In other local CTV-related news, Terri Apostle will be joining the team as a weather anchor on “CTV Morning Live.” She was previously a traffic reporter at CJOB.