Jane Siberry to Perform at the WECC on May 6 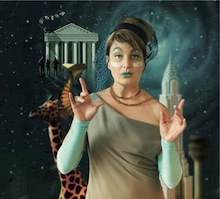 Canadian singer-songwriter Jane Siberry is preparing for a packed house at the West End Cultural Centre on Sunday, May 6.

The “Calling All Angels” singer’s work has been featured in films and television shows, and Siberry has even had the pleasure of recording with k.d. lang.

Siberry’s creative spirit can also be found in her paintings and her writings for The Huffington Post. Her recent collection, the Three Queens Trilogy has been released over the past few years. A fourth addition, Consider The Lily, is a gathering of the most universal songs of the trilogy and is being produced by fellow Canadian musician Peter Kiesewalter for a late 2012 release.

Tickets for “An Evening with Jane Siberry” are $35 at the door, or $30 in advance at the WECC, Ticketmaster, Music Trader, and Winnipeg Folk Festival Music Store.