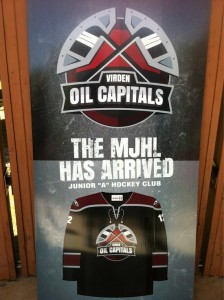 The name replaces the Winnipeg Saints, which had its franchise moved to Virden recently. The Oil Capitals will play in the 2012-13 MJHL season.

The Oil Capitals will start their season ticket drive on May 25 and hope to sell 500 tickets. The drive will coincide with spring camp.