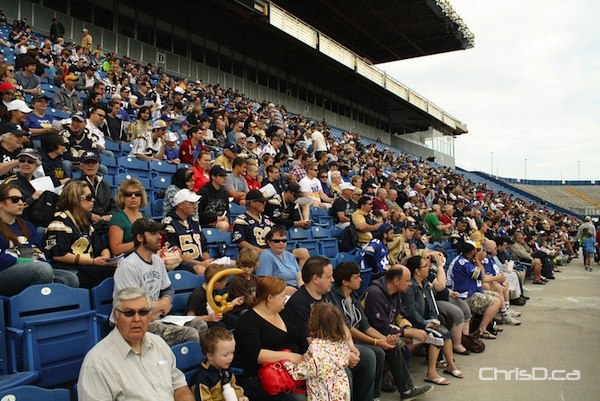 Football fans pack the stands of Canad Inns Stadium on Sunday, June 3, 2012 for the start of the Winnipeg Blue Bombers' 2012 training camp. Head coach Paul LaPolice was on a Twitter campaign to encourage as many fans as possible to come out. (HOWARD WONG PHOTO)

The rain mostly stayed away, and an estimated 7,500 fans migrated back to old Canad Inns Stadium on Sunday morning for the opening day of training camp for the Winnipeg Blue Bombers.

Beyond a bake sale put on by the coaches’ wives for Winnipeg Harvest, the dunk-a-Rider-tank, and an address from Premier Greg Selinger, there was also some football.

An intriguing positional group to watch were the receiving corps. The talented group all showed well, but it was 6-foot-5 newcomer Chris Matthews who opened the most eyes, grabbing everything thrown his way while lining up with the first team.

“There’s a lot of competition out there,” said the 22-year-old rookie out of Kentucky. “My chances are about as good as everybody who came out here as a wide receiver. We’re all fighting for a spot, and no matter what they say in the papers or anything like that, it’s up in the air.”