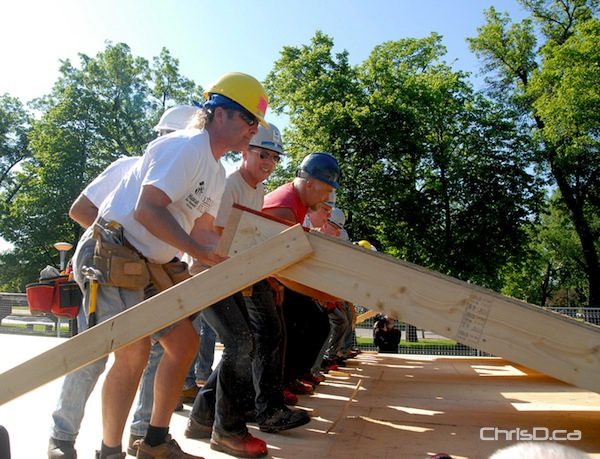 Volunteers raise the first wall to a home being built in Memorial Park as part of a Habitat for Humanity project on Monday, June 4, 2012. (STAN MILOSEVIC / MANITOBAPHOTOS.COM)

Habitat for Humanity will begin to transport a home constructed by volunteers from Memorial Park in the wee hours of Saturday.

The home will be secured and moved beginning at 4 a.m., where it will eventually rest on McCalman Avenue in Elmwood by 7 a.m.

The confirmed travel route will be north to Osborne/Isabelle to Mountain Avenue, and east to Main Street before using Chief Peguis Trail and Henderson Highway before reaching the Sir Sam Steele School site via Watt Street and Nairn Avenue. House transportation will be completed by turning north off Nairn to McCalman Avenue at Chester and then south at the first back lane accessing the former school property for drop off and temporary placement behind the school.

On June 4, the first wall was raised to mark Habitat’s 25th anniversary and Memorial Park’s 75th. Donations to the campaign can still be made until June 20.

← Previous: Transit Rerouting for Sunday's Manitoba Marathon Next: BikeFest Rolling into The Forks on Saturday →
Tags: Construction | Habitat for Humanity