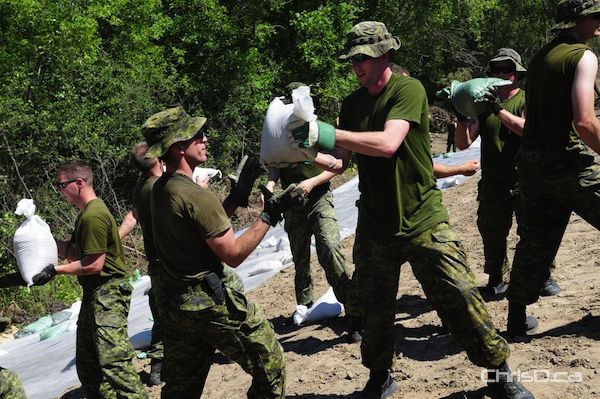 Canadian Forces soldiers form a chain and pass sandbags down the side of a dike next to the Waste Water Treatment Facility in Souris, Manitoba on Sunday, July 3, 2011. (MCPL HOLLY COWAN / ARMY NEWS)

Manitobans affected by last year’s flood are invited to attend two open houses this week in Brandon and Souris.

The Manitoba Flood Review Task Force is hosting the open houses in communities impacted by the record flooding seen in 2011. Residents will be able to meet with task force members, provide feedback on a wide range of issues related to last year’s flood, and learn more about the task force’s mandate and factors that contributed to the flood.

The task force was appointed by the province to independently examine a range of matters related to last year’s historic flood, including preparedness and response, flood forecasting, public communications, operation of flood control infrastructure and flood protection.

The first open house will be held today from 4 p.m. to 8 p.m. at Brandon’s Keystone Centre (Salon A). On Thursday, residents in Souris can attend the Souris Glenwood Memorial Complex (Kirkup Lounge) between 4 p.m. and 8 p.m.