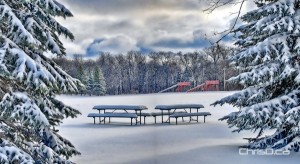 The City of Winnipeg is working around the clock to plow main routes, bus routes and collector streets.

After Environment Canada recorded 25 centimetres of snowfall in Winnipeg between late Saturday and into Sunday morning, the city will be working the rest of today and Monday to open up streets.

About 200 pieces of equipment will be used to get the job done. Plowing of sidewalks on bus routes, collector streets and sidewalks on residential streets will commence following the clearing of main arteries. Salting and sanding of streets is also continuing. 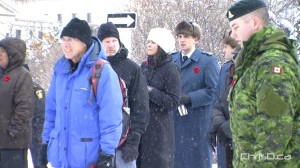 People bundle up to take in Remembrance Day ceremonies on Sunday at the Manitoba legislature. (CHRISD.CA)

Hauling of snow from the downtown area will also begin tonight, and motorists are advised that temporary no parking signs will be placed manually on streets where snow hauling is scheduled to occur.

The city has imposed a residential parking ban in effect on Monday at 7 p.m. to Thursday, November 15 at 7 a.m. Motorists are urged to go to knowyourzone.winnipeg.ca or call 311 to confirm their snow zone letter of the alphabet.

The weather is also believed to have contributed to an overturned semi-trailer truck on the Trans-Canada Highway Sunday afternoon. RCMP closed the westbound lanes of the highway at the Portage la Prairie bypass shortly before 1 p.m. The highway reopened roughly two hours later.

While the snow accumulation was immense, it didn’t deter hundreds of people from attending Remembrance Day ceremonies across the city. Many braved the elements for a number of outdoor ceremonies, including one at the Manitoba Legislative Building with the 38 Canadian Brigade Group, who held a gun salute to honour Canada’s veterans.