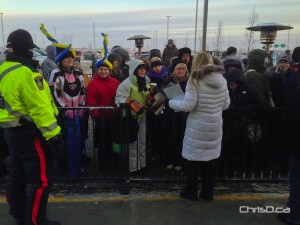 Shoppers wait in line outside for IKEA Winnipeg to open on Wednesday morning. (CHRISD.CA)

The day shoppers have been waiting decades for, and more realistically years for, has finally arrived.

IKEA Winnipeg swung open its doors at 9 a.m. Wednesday to thousands of eager diehards who waited hours overnight in the cold to be among the first to see the new store. People began lining up at 12:01 a.m. in an effort to be within the first 1,000 people who received free gift cards valued at $75. As a gesture of not letting its new customers freeze their debit-punching, credit card-swiping fingers in the chilly temperatures, IKEA let the first 1,000 people wait inside the store once the line reached its cutoff capacity for the gift card giveaways.

Some shoppers couldn’t wait until midnight and began trying their luck at accessing the parking lot as early as 5 p.m. yesterday afternoon. Security quickly turned away those who arrived some seven hours early.

Barry Capner and Barb Pellerin were the first two people in line, having arrived at about 8:30 p.m. last night. What’s on their must-have list? Kitchen ideas, but the thought of two $75 gift cards definitely enticed them to line up early.

Shopper Trish Kekropidis won the grand prize of a $5,000 IKEA gift card by opening up a “golden” Allen key during one of the giveaways. There were five golden keys, one of which opened a box on the stage containing the top prize. Kekropidis, who was in line with her brother and sister, will split the shopping spree between herself and siblings.

The roughly 390,000-square-foot Swedish furniture store is expecting customer traffic volumes to remain at a high level for the next six weeks. To handle the rush, additional staff have been temporarily brought in from other stores, and the retailer has hired private security and Winnipeg police officers to remain on site until next week.

Many Winnipeggers on social media who aren’t of the standing-in-line mentality, said they will wait at least six months before visiting the Sterline Lyon Parkway store to let the hype and crowds settle down.

Shoppers pay for items during a preview night at IKEA Winnipeg earlier this week. (CHRISD.CA)

Shoppers steam in as IKEA Winnipeg opened its doors to the public on Wednesday, November 28, 2012. (CHRISD.CA)

Shoppers wait in line outside for IKEA Winnipeg to open on Wednesday morning. (CHRISD.CA)

IKEA by the numbers: