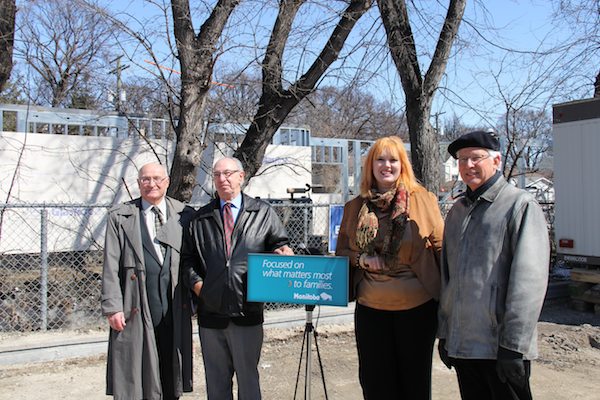 Maurice Therrien, chair of the board of directors of Sara Riel Inc., Mel Boisvert, of the government relations committee of the Winnipeg Realtors Association, Minister Kerri Irvin-Ross, and Clark Brownlee, coalition co-ordinator of Right to Housing, during an affordable housing announcement on Friday, April 19, 2013. (BERNICE PONTANILLA / METRO WINNIPEG)

Housing and Community Development Minister Kerri Irvin-Ross announced Friday that 500 affordable housing units and 500 social housing units will be built over the next three years.

“Every Manitoban should have access to a good, affordable home to build a life for their family, which is all that much more important with so much uncertainty in the economy,” Irvin-Ross said. “That’s why we’re taking new steps to give more families access to better housing and it’s why we’re providing new incentives to private-sector developers to help build even more options for Manitobans.”

These new units will add to the Manitoba government’s HOMEWorks! program already underway to develop 3,000 new affordable and social housing units by 2014.

The tax credit will provide an eight percent credit on construction costs for private developers to build the units.