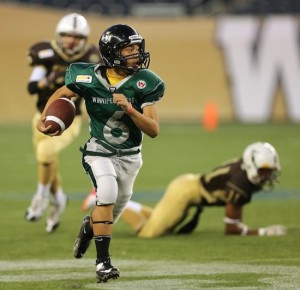 The gold medal game in the fourth annual Red River Cup will come to a head tonight at Investors Group Field.

Since July 6, five under-16 football teams have been competing in front of universities and junior scouts. BC Lower Mainland, North Saskatchewan, South Saskatchewan, Winnipeg East and Winnipeg West have been on the field to weed out their competition.

Winnipeg West and BE Lower Mainland are ready to clash at 6 p.m. in the high performance football tournament.

“They’re certainly a very good team — very good on both sides of the ball and special teams,” said Team BC head coach Sean Roden of Winnipeg West. “I think they have the best player in the tournament in running back Trevor Wright and we have to figure out how to stop him.”

“We’ll probably game plan for him and then force them to beat us with some other weapons.”

A day pass is $10 for adults. Children ages 3 to 8 are $7 per day. Tickets are available through Ticketmaster.