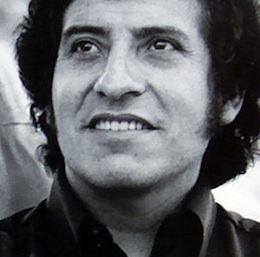 The musical life of Chilean singer-songwriter and theatre director Victor Jara will be celebrated on September 14 by a group of Winnipeg musicians.

Hugo Torres-Cerceda, Jessee Havey, John K Samson, Illay & Natasha Torres-Garner will pay tribute to Jara with a celebration of his life and music at the West End Cultural Centre.

September marks the 40th anniversary of the Chilean Coup d’état and the torture and murder of the Jara, who was arrested on September 12, 1973 and held in Estadio, Chile with 5,000 other political prisoners where he was beaten and tortured. At one point soldiers broke his hands and taunted him with a guitar asking him to play it for them. Witnesses say that in response he sang “Venceremos” (We Will Win). On September 16, he was executed and his body shot 44 times before being dumped on the outskirts of Santiago.

Recordings of Victor Jara’s music survive only because his wife Joan was able to smuggle copies of his albums out of the country. Chile’s secret police attempted to destroy all of the master recordings in the years following the coup.

Tickets to the show are $25 at the door or $20 in advance through the West End Cultural Centre, Ticketmaster, Winnipeg Folk Festival Music Store and Music Trader.