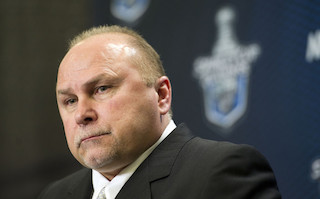 Trotz is the guest speaker at the event to benefit the Bison men’s and women’s hockey programs, while also supporting student athletic scholarships.

The special event will be staged at the Canad Inns Fort Garry on the same night two Bison alumni (one from each program) are inducted into the Bison Hockey Hall of Fame.

“We are thrilled to have Barry Trotz participate in this year’s Bison Hockey fundraiser dinner,” said Bison men’s hockey head coach Mike Sirant. “Barry has never forgotten his Manitoba roots and has been an exceptional supporter of Bison Hockey throughout highly successful NHL career.”

Single tickets are $150 with a tax receipt for the donation portion of ticket. Corporate Tables are $1,200 (table of eight). All donations will be matched by the Manitoba Scholarship and Bursary Initiative. The event will include numerous door prizes and a silent auction.