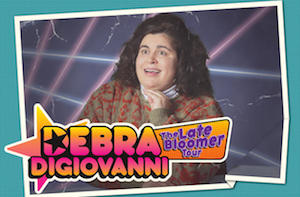 Comedian Debra DiGiovanni is bringing her cross-Canada tour to Winnipeg later this month.

DiGiovanni will perform at the Pantages Playhouse Theatre on Wednesday, January 29 as part of her Late Bloomer Tour.

The 21-city run will have the affable comedian charming audiences nationally from coast-to-coast. DiGiovanni has been hailed as the “best comedian to see after a messy breakup” and was named Toronto’s favourite comedian for two consecutive years in 2008 and 2009.

Tickets are on sale now for $35.50 through Ticketmaster and HaHaHa.com/debradigiovanni.