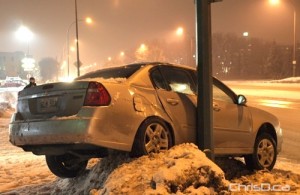 Winter claims are already stacking up at MPI. (CHRISD.CA FILE)

Manitoba Public Insurance is reporting a solid third fiscal quarter – but is cautious about the number of claims made by Manitobans during the brutal winter they’ve faced so far.

MPI saw a net income of $64.5 million for the nine months ending November 30, 2013, up far more from the $15.1 million in gains during the same period last year. They saw the boost despite a two per cent overall increase in claims during the period – physical damage claims to vehicles rose by $19.7 million (a rise of about 5.5 per cent), but it was offset as bodily injury claims fell $8.8 million (or 4.7 per cent).

MPI says that while the first nine months of their fiscal year were stable, they’re bracing for winter claim counts already far above normal historical levels.

“December collision and injury claims were both more than 17 per cent higher than last December’s claims,” said Heather Reichert, Vice-President, Finance and Chief Financial Officer. The number of claims in early January has remained consistent with December’s numbers.

“After three quarters of the year, the corporation is in stable financial position thanks primarily to a rebound in the investment markets,” said Richert. “But we are entering the final quarter already facing much higher than normal winter claims counts.

“Motorists need to drive to the conditions of the road and avoid collisions during the final quarter which is usually a difficult period of time for driving,” she said.