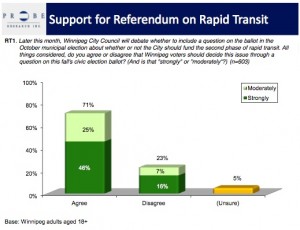 The majority of Winnipeggers don’t want to see the second phase of rapid transit to the University of Manitoba completed without having a say on the project.

A new Probe Research poll finds that 71 percent of those surveyed would like to vote on whether or not the southwest transitway comes to fruition. Of voters who identify themselves as being decided, 53 percent oppose funding the second phase altogether.

The survey also asked if citizens were in favour, or opposed to, the city’s current plan of spending $590 million to complete the second phase, which would extend south from Jubilee Avenue. Forty-two percent of those asked would vote to complete the megaproject, 11 percent weren’t sure or didn’t respond, and 47 percent voted “no” on a hypothetical plebiscite question — opposing the hundreds of millions needed to complete the work.

City council will decide on Wednesday whether a rapid transit plebiscite question will be added to the municipal election ballot on October 22.

The city-wide survey was conducted via telephone between June 10 and June 19 among a random and representative sampling of 603 Winnipeg adults.