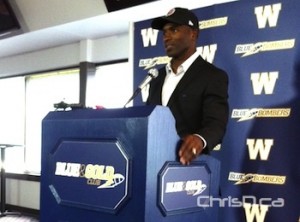 Stegall was at the Sport for Life Centre as Sport Manitoba awarded $25,000 in academic scholarships to 15 high school students, seven university students, and four Manitoba coaches.

This year’s high school recipient was Chad Enns, while U of M Bison women’s volleyball player Taylor Pischke won in the post-secondary category. Pischke also picked up a Princess Royal Pan Am Scholarship, worth another $3,000. Curler Daniel Grant of the U of M was also awarded in the same category for $3,000.

The recipient of the Bud Tinsley Sport Leadership Scholarship of $500 was Eric Guy.