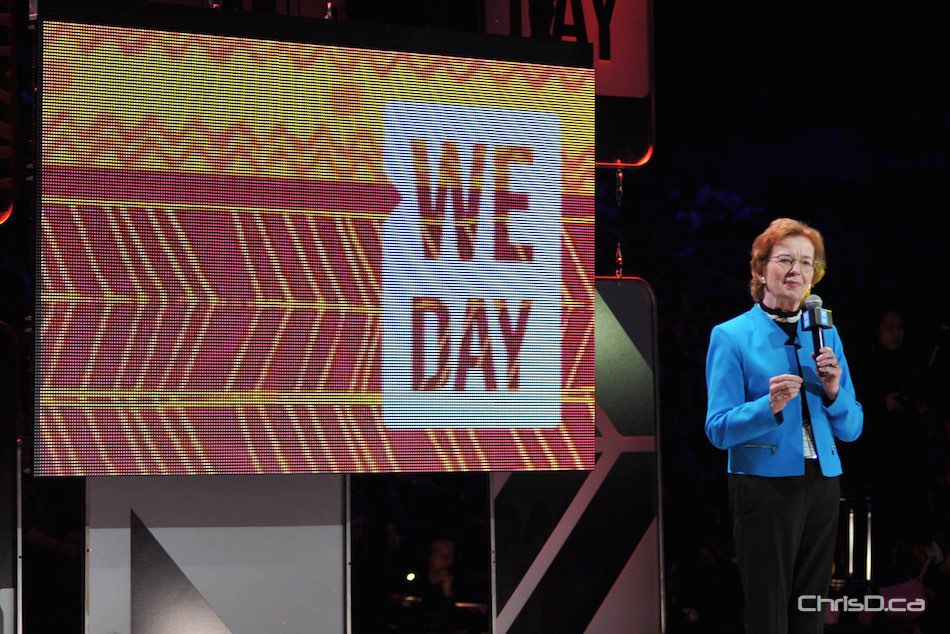 Mary Robinson, the former president of Ireland, addresses the crowd during We Day at MTS Centre on Wednesday, October 29, 2014. (TED GRANT / CHRISD.CA)

WINNIPEG — An exuberant crowd of about 16,000 students from more than 450 schools across Manitoba packed Winnipeg’s MTS Centre on Wednesday for We Day.

The annual event of positivity brings in notable guest speakers, social advocates and musicians for a day of inspiration to get youth energized to conquer the world around them.

Mary Robinson, the former president of Ireland, was the keynote speaker for the event, which also included performers Shawn Desman, Hedley, Karl Wolf, and Kardinal Offishall.

“Today we have chart-topping artists, spoken word poets, dance troops, world-renowned speakers and incredible youth on the We Day stage addressing issues and causes they are passionate about to encourage youth in the audience to find their spark and take action locally and globally,” said We Day co-founder Craig Kielburger.

Since 2007, students involved have been able to raise $45 million for more than 1,000 local and global causes, collecting 5.6 million pounds of food for local food banks and logging 14.6 million hours of volunteer service.

The event was put on by Free The Children, a Canadian charity founded by brothers Craig and Marc Kielburger.