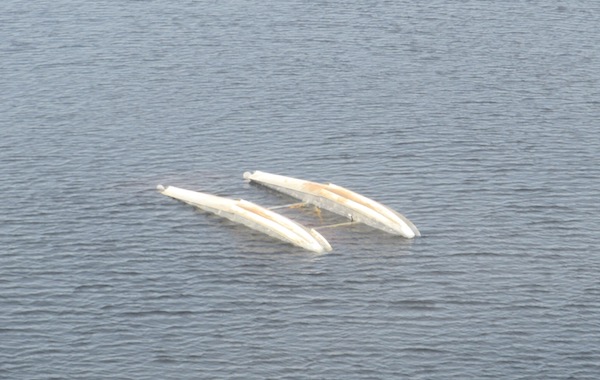 An overdue floatplane was found upside down in Bushey Lake northeast of Bissett, Manitoba on Saturday, May 23, 2015. (RCMP HANDOUT)

WINNIPEG — Three people suffered mild hypothermia last weekend when the floatplane they were in tipped upside down.

RCMP received a call on May 23 at around 9:30 p.m. for the overdue aircraft on the remote lakes northeast of Bissett, Manitoba. The three males were to return to Lac du Bonnet by 6 p.m. after venturing out at around 8 a.m.

Manitoba Conservation was called in, along with CFB Trenton, to begin a search of the area. A Hercules air search found the plane at around 5:30 a.m. Sunday in Bushey Lake northeast of Bissett.

The three people aboard were now on the shore hovering around a small camp fire. The Hercules hovered over the location until around 9 a.m., when a plane from Bluewater Aviation was able to make a rescue.

The trio was flown back to Bissett where a Manitoba Conservation officer safely picked them up.

The Transportation Safety Board of Canada and Air Traffic Control are currently investigating.