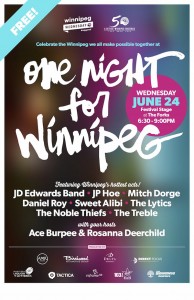 The United Way of Winnipeg is continuing with its 50th anniversary celebrations by throwing a concert at The Forks.

One Night for Winnipeg on Wednesday, June 24 will include the JD Edwards Band, JP Hoe, Mitch Dorge, Daniel Roy, Sweet Alibi, The Treble and others.

The event will also try to set a record for the most people drumming together at one time.

The free concert runs from 6:30-9:30 p.m. on the festival stage and is part of United Way’s Winnipeg Wednesdays campaign.