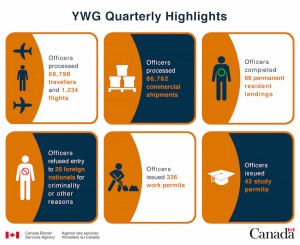 The Canada Border Services Agency was kept busy during the second quarter in Winnipeg, including its airport, commercial and inland operations.

The CBSA reported from April to June, officers made 11 suspected narcotics seizures including over 115 grams of suspected marijuana, and 514 dosages of suspected steroids.

Officers also intercepted four separate shipments containing substances suspected to be the steroid dehydroepiandroterone, commonly known as DHEA. These substances were destined for various addresses Alberta and Winnipeg and the packages were declared as different types of supplements.

Border guards at James Richardson International Airport seized four grams of suspected loose marijuana on June 19, as well as as over 92 grams of cookies and candies infused with suspected marijuana from a 38-year-old California man.

He was arrested and turned over to the RCMP.