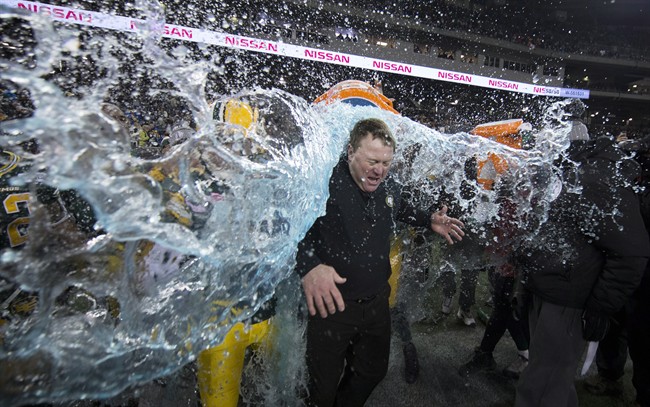 Edmonton Eskimos’ head coach Chris Jones gets Gatorade poured on him following his teams win over the Ottawa Redblacks during the 103rd Grey Cup in Winnipeg, Man. Sunday, Nov. 29, 2015. (THE CANADIAN PRESS/Darryl Dyck)

The drive was aided by Edmonton head coach Chris Jones challenging an incompletion that was ultimately changed to pass interference against Ottawa’s Brandon Sermons. That gave the Eskimos the ball at the Redblacks’ 10-yard line.

Jones thought he noticed the pass interference and threw a challenge flag, which was not a tactic that went well for him this season. He had lost every challenge he attempted this year before finally winning one during Edmonton’s victory over Calgary in last week’s West Division final.

“I had to call a time out, and I said: ‘Look at this because it’s too big a situation, and if it is (pass interference) then we need to throw a flag,” Jones said. “That’s how it transpired.”

It was a dramatic finish for the Investors Group Field sellout of 36,634, the second-smallest Grey Cup attendance since 1975. It was the fourth time the CFL title game was played in Manitoba, and the first since 2006.

Edmonton secured its first Grey Cup title since ’05 and 14th overall in a record 25th appearance. Only Toronto (16) has won more.

The Eskimos also finished the season registering their 10th straight win, all coming after Reilly returned as the club’s starter. He suffered a knee injury in Edmonton’s season-opening loss to Toronto.

Reilly, who was named the Grey Cup’s most valuable player, said getting to a championship game is “an opportunity you get to have a handful of times if you’re lucky.”

“It’s certainly special,” he added. “It’s something that I’ll never take for granted. It’s memories that I’m happy I’ll have for the rest of my life.”

It was a bitter ending to the season for Ottawa, appearing in its first Grey Cup since a 26-23 loss to Edmonton in 1981. The city’s last CFL championship came in 1976 with the former Rough Riders.

“It’s not anger it’s disappointment,” Ottawa head coach Rick Campbell said when asked about his mood following tough loss for the Redblacks. “This is definitely not a business to be in if you don’t like highs and lows. That’s part of what you sign up for when you’re in this business. But obviously heartbroken, disappointed, all those things. I’m so proud of those guys and so proud to coach them. And that’s what make it so disappointing to get this far and not get it done.”

The contest was a defensive battle, especially in the second half as Edmonton outscored Ottawa just 9-4. But after falling behind 13-0 early in the first quarter, the Eskimos outscored the Redblacks 26-7.

Edmonton players receive $16,000 for the win while the Redblacks get $8,000 apiece. The game-time temperature was -5C but the 15-kilometre-an-hour wind created a windchill of -10C.

Jones compiled a 26-10 regular-season record over his two seasons as Edmonton’s head coach. Now the question remains how long he’ll remain with reports the Saskatchewan Roughriders will ask permission to speak with Jones about their vacant head coach and GM positions.

This Grey Cup game was indeed a matchup of the best teams in the East and West Divisions. Ottawa (12-6) finished atop the Eastern conference after winning just two games in its inaugural 2014 season while Edmonton (14-4) finished tied with Calgary for the league’s best record but secured top spot in the standings based after winning the season series with the Stampeders.

But Ottawa finished 0-3 versus Edmonton this year, the first two losses coming in July with Reilly on injured list.

“We had opportunities to turn the tide and we just didn’t make the plays, whether it was me missing a throw or making a play or something,” Burris said. “They found ways to make plays and to get us off the field … But we had ample opportunities to go down and put this game out of reach.

“Kudos to Edmonton. They made plays and we didn’t and that’s the reason why they won the game.”

Following a half-time performance by the band Fall Out Boy, Edmonton took the ball to start the second half after deferring to open the game. Despite having the ball for 10 minutes in the third quarter, Edmonton was outscored 3-1 as Ottawa took a 19-18 advantage into the fourth.

Reilly’s two-yard TD strike to Shavers at 14:48 of the second gave Edmonton a 17-16 half-time lead. While a two-point convert was unsuccessful the 10-play, 88-yard drive was huge as it erased a horrid start for the West Division champions, who fell behind 13-0 before the game was seven minutes old.

Burris hit Lavoie on a three-yard TD pass at 11:38 as Ottawa opened the game with a seven-play, 73-yard scoring march. Then Burris found Jackson on a seven-yard touchdown toss set up by Domaso Munoz’s recovery of Kendial Lawrence’s fumble on the ensuing kickoff. Milo missed the convert.

Note to readers: This is a corrected story. A previous version had the wrong time if the winning touchdown in the first paragraph.