The Extinct Journalist? Layoffs Have Profession in Jeopardy: Currie 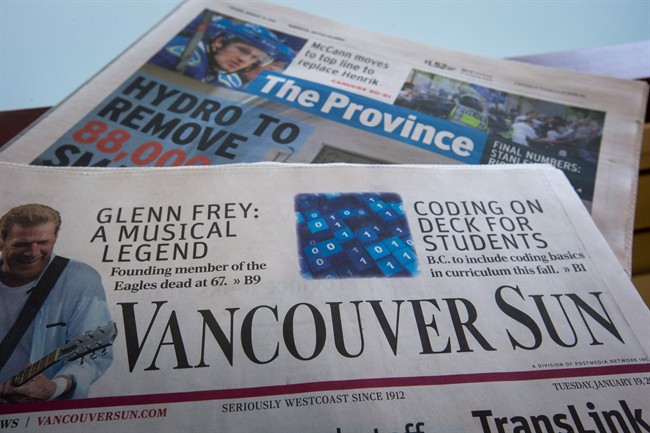 Copies of Postmedia-owned newspapers the Vancouver Sun and Province are displayed at a store in Burnaby, B.C., on Tuesday January 19, 2016. (THE CANADIAN PRESS/Darryl Dyck)

Forty-five years ago, when I first started doing this kind of work, I was proud to answer ‘journalist’ when someone asked me what I did for a living. Now I’m quite content to say semi-retired. It’s conceivable that there could come a time when ‘journalist’ will be a quaint anachronisms, like blacksmith or stenographer.

Printed newspapers have been dying a slow death for a decade or more, but soon they may be on serious life support. Postmedia, which owns more of them than anyone else in Canada, eliminated 90 jobs this week. In 2014, they took over the Sun papers who used to be their competition. 35 jobs were swept away in Edmonton, and the same small handful of people who put together the Sun, will also be responsible deciding what the venerable Edmonton Journal will look like.

Imagine you were working on an auto assembly line, making Chevys, and the boss said, “Every other day you’re now going to be making Toyotas.” Clearly what Postmedia CEO Paul Godfrey and his cronies did this week is only a partial step in what will be an endless exercise in cost-cutting, and the job losses are going way beyond showing the door to the most junior staff. Senior editor Margo Goodhand was let go in Edmonton. Previously she was a longtime editor at the Winnipeg Free Press.

The story is not much different in radio and television newsrooms. All of them are downsizing, and many are flat out disappearing. What are the consequences down the road? When Justin Trudeau and our other members of Parliament stand for re-election four years from now, will there be many journalists out there to cover what’s going on? I very seriously wonder.

It used to be said, shortly after the dinosaurs became extinct, that our job as journalists was “to comfort the afflicted, and afflict the comfortable.” Who would have ever guessed that we would eventually become the afflicted. Thank heavens for pensions and semi-retirement, and say a prayer for quaint notions like democracy.