Near-Record Number of UFOs Reported in Canada in 2015: Study 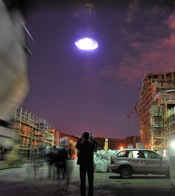 The truth is out there, and in 2015, more Canadians tried to find it when it came to UFOs.

A newly-released study by Winnipeg-based Ufology Research has found while UFOs aren’t on the minds of most people, sightings of the flying objects spiked last year to 1,267. That’s about three or four every day reported to civilian and official agencies.

Nationwide, there were 1,021 reports of UFOs. That’s still lower than in 2012 when 1,981 reports were received when media attention was on the Mayan calendar and the so-called “end of the world.”

The number of reports still remain high, and Ufology Research says that can be explained by the theories of more secret or classified military exercises and overflights are occurring over populated areas, or simply more UFOs.

The typical UFO sighting lasted approximately 16 minutes in 2015 and Quebec garnered 35 percent of all sightings that same year. That’s an increase of between five and 15 percent compared to previous years.

Despite the findings, there remains to be concrete evidence that some UFO cases involve extraterrestrial contact.

“The continued reporting of UFOs by the public and the yearly increase in numbers of UFO reports suggests a need for further examination of the phenomenon by social, medical and/or physical scientists,” the study says.