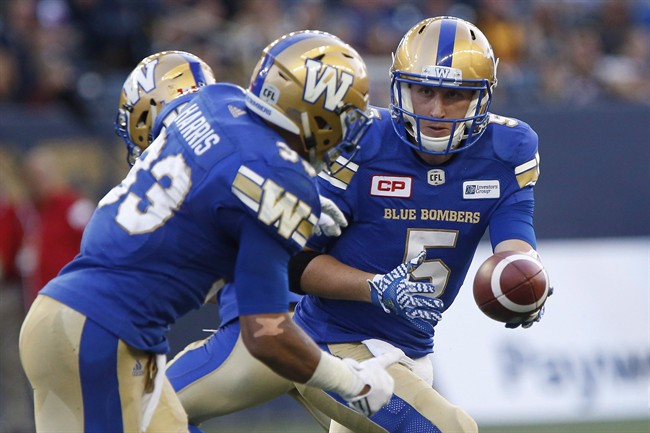 Winnipeg Blue Bombers quarterback Drew Willy (5) hands off to Andrew Harris (33) during the first half of CFL action against the Edmonton Eskimos in Winnipeg on July 14, 2016. (THE CANADIAN PRESS/John Woods)

The Winnipeg Blue Bombers have sent quarterback Drew Willy to Toronto in a move that will not only save the club cash, but also strengthen their roster.

Willy has been sidelined ever since Matt Nichols took the starting QB job earlier this season, taking the Bombers to 7-4.

Winnipeg also traded their fourth round pick in the 2017 CFL Draft to Montreal in exchange for quarterback Kevin Glenn. The Detroit native played for the Blue and Gold from 2004–2008.

“The opportunity to acquire a first round pick next year along with a player we have really liked this season in TJ Heath, and an experienced quarterback in Kevin Glenn was something we needed to strongly evaluate,” said GM Kyle Walters.

“Ultimately, for a variety of factors, we felt this was the right move for our football team, both short and long term. We sincerely thank Drew Willy for his hard work, professionalism and dedication to our program over the past two plus seasons.”

The Bombers just happen to host the Argos at Investors Group Field on Saturday.