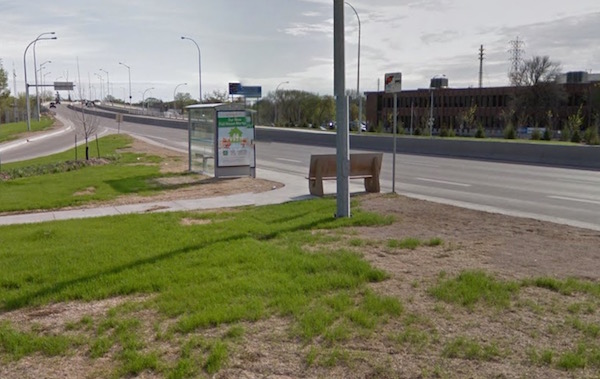 The bus stop at the Disraeli Freeway and Sutherland Avenue where a woman in her 30s was sexually assaulted and robbed on Friday, September 16, 2016. (GOOGLE STREET VIEW)

WINNIPEG — A woman in her 30s was treated in hospital Friday evening after being seriously sexually assaulted and knocked unconscious.

The victim was waiting for a bus in the area of the Disraeli Freeway and Sutherland Avenue at around 5:30 p.m. when she was approached from behind.

A male suspect assaulted her and the woman later awoke in the area of Rover Avenue and Disraeli Street. She had also been robbed.

The suspect is described as a man in his 30s, fair-skinned, approximately 6’0 tall, with a thin athletic build. He had short hair and a light brown goatee.

The victim was treated for non-life threatening injuries.