Home » News » Pulling It All Together for the United Way

Pulling It All Together for the United Way 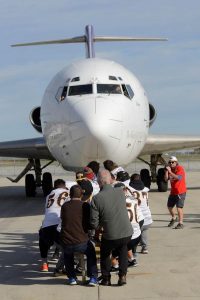 Teams pulled together on Friday all in the name of mentoring children.

The United Way Winnipeg’s 13th Annual Plane Pull had 78 teams registered and more than 2,000 people compete to pull aircraft in the least amount of time.

A record-breaking $40,000 was raised and donations are still rolling in.

“United Way’s campaign, as always, remains a way for all of us to have fun, celebrate our city and donate,” said campaign chair Neil Besner.

“We will continue to support all the programs and services that help thousands of people every day. But this year is also the beginning of a three-year journey to go further, and help more kids and families that are facing real challenges.”

Every dollar raised will go directly towards providing mentorship for kids and helping the United Way reach its 2016 campaign goal.

The iconic CL-215 water bomber joined the Boeing 727 on the tarmac of Red River College’s Stevenson Campus for the event.

Local Winnipeg bands Noble Thiefs and Papa Mambo provided entertainment for the day to get teams into the spirit of pulling together.