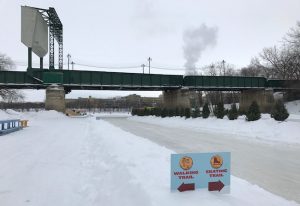 The Red River Mutual Trail opened for the season at The Forks on Monday. (CHRISD.CA)

WINNIPEG — Skaters, lace ’em up. The Red River Mutual Trail at The Forks is open for the season.

“The ice has been ready for a while. We had that nice cold snap in early December, which is what helped us out on the Assiniboine (River) this year,” said Chelsea Thomson, manager of marketing and communications with The Forks.

“We just now have to work with Mother Nature and the amount of snowfall, because every time it snows it has to be cleared off.”

Crews will continue to work on expanding the trail on both rivers over the coming weeks.

Hey #Winnipeg — we’re officially opening the @RRMT today at 1 pm!! Can’t wait to see you out there! ??? #MeetMeAtTheForks pic.twitter.com/56hPhDfDL8