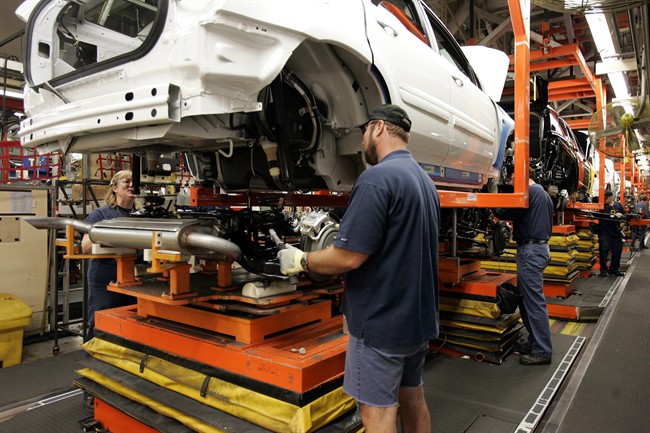 Production of the General Motors’ CAMI Automotive facility in Ingersoll, Ontario, is shown in this Thursday, Dec. 21, 2006 file photo. Union officials say General Motors is cutting up to 600 jobs at its assembly plant near London, Ontario. (THE CANADIAN PRESS/Dave Chidley)

General Motors is cutting 625 jobs at its assembly plant near London, Ont., a move that union officials say demonstrates why NAFTA has been a bad deal for the Canadian automotive industry as jobs have migrated to lower-cost jurisdictions such as Mexico.

“The CAMI announcement is a shining example of everything wrong with NAFTA, it must be re-negotiated,” Unifor president Jerry Dias said in a statement Friday.

“It is imperative that we have trade rules that help ensure good jobs in Canada.”

The layoffs will take effect in July at the CAMI Assembly plant in Ingersoll, Ont., which employs 2,800 Unifor workers.

GM Canada said it gave Unifor advance notification of how product changeovers would affect workers at three Ontario plants, adding it will continue to work with the union to help manage the adjustment.

The Ingersoll plant builds the Chevrolet Equinox and the GMC Terrain. The company recently announced it was shifting production of the GMC Terrain to Mexico.

A GM Canada spokeswoman said the cuts Friday related to the changeover of production from older model Equinoxes to the next-generation Equinox.

U.S. President Donald Trump has been outspoken about his plans to revise NAFTA, calling it the worst trade deal the U.S. has ever signed.

Trump’s protectonist, America-first comments have caused concerns about whether Canada’s automotive industry could take a hit, particularly if a border tax is implemented on Canadian goods.

But several industry insiders have argued that Canada is most likely not the target that Trump has set his sights on.

“Trump talks about the countries that have stolen American jobs,” Dias said earlier this week.

There are 141,000 people employed in Canada’s automotive sector, either on the vehicle assembly or the parts manufacturing side, according to the Conference Board of Canada.

That’s roughly 60,000 fewer people than were employed in the sector a decade ago, as some roles have been automated and others have been moved to Mexico, where labour costs are cheaper.

Meanwhile, the surplus that Canada once enjoyed on its automotive trade with the rest of the world has slipped into a widening deficit.

Before 2006, Canada’s auto sector had an annual trade surplus of around $10 billion. In the fourth quarter of 2016, the sector had a net deficit of $25.6 billion, according to the Conference Board.

While much remains unclear about Trump’s trade policy, some industry players argue that there may be an upside for Canada if NAFTA is rewritten in such a way that privileges America’s northern neighbour over Mexico.

If Trump is able to bring more automotive jobs back to Detroit, that would create more opportunities for Canadian auto parts suppliers says Flavio Volpe, president of the Automotive Parts Manufacturers’ Association.

“If Michigan is the new Mexico then Ontario wins,” Volpe said.

But Dennis DesRosiers, president of DesRosiers Automotive Consultants, is less optimistic about how Trump’s trade policy — be it through a renegotiation of NAFTA or a tariff on Mexican goods — could impact the auto sector.

Because of how integrated the automotive industries in Canada, the U.S. and Mexico are, a tariff on Mexican imports would significantly increase the cost of all North American vehicles, DesRosiers says.

“That would result in tens of thousands of job losses across North America.”

Brad Duguid, Ontario’s economic development minister, says there are both risks and opportunities on the table for Ontario with regards to a renegotiation of NAFTA.

“I think the jury’s out in terms of what will or will not be accomplished by that,” Duguid said.

“But the fact is, we know the reality, and that’s that President Trump is planning to reopen these discussions and I think our prime minister is wise to be proactive in coming to the table and identifying what our potential interests may be.”

Van Boekel said the layoffs will primarily affect young workers. The news has taken its toll on morale, and employees — who for years had been working Saturdays to keep up with demand — are furious, he said.

Interim Conservative leader Rona Ambrose said the news speaks to a need for government action to increase the sector’s competitiveness.

—With a file from Keith Doucette

← Previous: Warming Huts Transforming from Vision to Reality at The Forks Next: Rise of the Machines: Jackman-Atkinson →
Tags: Canada | United States