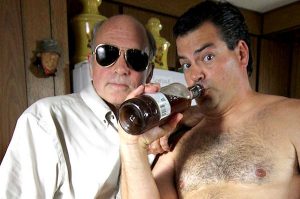 Mr. Lahey and Randy from “Trailer Park Boys” will perform May 2 at the Burton Cummings Theatre.

Randy and Mr. Lahey will appear May 2 at the Burton Cummings Theatre.

The show includes a mix of stand-up and improv, promoted as a “silly, sexist, drunken hour and a half of songs and skits, audience participation, profanity, Shakespeare and general hilarity.”